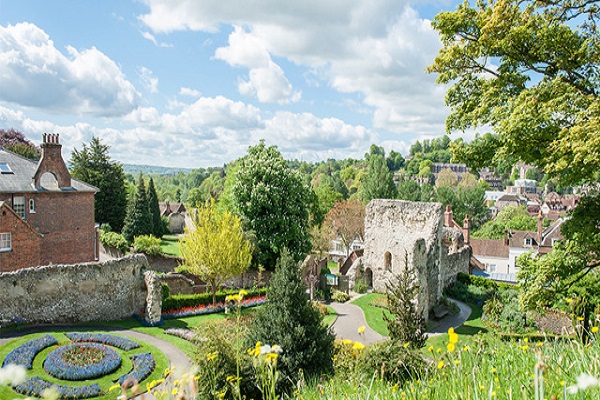 Guildford began as a Saxon village by a ford. It was called the guilden (golden) ford. It may have been called that because of golden flowers that grew at the riverside or because of the golden sands on the banks of the river.

The village of Guildford turned into a town in the early 10th century. At that time the English kings were building a network of fortified settlements across the country as bulwarks against the Danish invaders. It is possible that Guildford was made such a fortified settlement. If so, Guildford would have been surrounded by a ditch and earth rampart with a wooden stockade on top.

Saxon Guildford had a population of only several hundred. Nevertheless it was a thriving community and it had its own mint. In the mid-10th century St Mary’s Church was built or rebuilt in stone (which was unusual in an age when most parish churches were of wood). The tower still survives.

GUILDFORD IN THE MIDDLE AGES

By the time of the Domesday Book (1086) Guildford probably had a population of around 900. It might seem tiny to us but settlements were very small in those days. A typical village had only 100 or 150 inhabitants. The Normans built a wooden castle to overlook Guildford. In the 12th century it was rebuilt in stone.

In Medieval Guildford the main industry was making wool. The wool was fulled. This means it was cleaned and thickened by pounding it in a mixture of water and clay. The wool was pounded by wooden hammers, which were worked by watermills. After it was dried the wool was dyed. Apart from fullers and dyers in Guildford there were the usual craftsmen found in any Medieval town such as carpenters, blacksmiths, butchers and bakers.

Guildford was given its first charter in 1257. A charter was a document giving the townspeople certain rights. Usually it gave them the right to form their own government. Guildford was given the right to hold a market and a fair. In the Middle Ages a fair was like a market but it was held only once a year for a period of a few days and it would attract buyers and sellers from all over Surrey and North Hampshire. Furthermore from 1295 Guildford sent 2 MPs to parliament.

However Medieval Guildford failed to develop very much. Its population may have grown to about 1,300 in the 14th century but it remained a small town. Perhaps it was too near to London and the capital drew away trade.

In the early 12th century a ‘hospital’ was built for the poor and sick in Guildford. From the 13th century there were also Dominican friars in Guildford. (They were known as Black Friars because of the color of their costumes). Friars were like monks but instead of withdrawing from the world they went out to preach.

GUILDFORD IN THE 16TH CENTURY, 17TH CENTURY AND 18TH CENTURY

In 1507 a grammar school was founded in Guildford. Then in 1539 Henry VIII closed the friary and the hospital. Guildford declined in importance in the 16th century. In 1611 a writer said ‘It had been far greater than now it is’. One reason for this was the decline of the wool trade due to increasing competition from the North of England.

By 1611 Guildford Castle had fallen into ruins. In that year the king sold it to a private owner.

On the other hand Guildford continued to be an important market town for the surrounding villages. In 1602 the authorities stated that ‘the markets of this town of late years (thanks be to God) have much increased and are daily likely to be greater and greater’.

In 1619 George Abbot the Archbishop of Canterbury founded some almshouses for old people, known as Abbot’s Hospital. In 1629 he built a cloth hall where linen could be manufactured. It was supposed to provide employment for the cloth weavers affected by the decline of the wool trade. The venture was not a success however.

Like all towns in those days Guildford suffered from outbreaks of plague. It struck in 1645-46 at the end of the civil war. However in 1683 a new Guildhall was built in Guildford.

In the 18th century Guildford remained a small and relatively unimportant market town. It would seem no more than a village to us with a population of, at most, 2,500.

GUILDFORD IN THE 19th CENTURY

In 1801, at the time of the first census, Guildford had a population of around 2,600. Even by the standards of the time it was a small town.

However it grew rapidly in the 19th century. In 1818 a corn exchange where grain could be bought and sold was built. Guildford gained a gas supply in 1821 and gas was used to light the streets. The first electricity supply in Guildford followed in 1891.

In 1836 a Borough Council was formed. In the 1860s the council paved the streets of Guildford. In the 1890s they constructed drains and sewers.

In the late 19th century public parks were created in Guildford. In 1885 the council bought the castle grounds to use as a park and they were opened to the public in 1888. Stoke Recreation Ground opened in 1889. A museum opened in 1898.

Guildford gained its first local newspaper in 1855. However the biggest change was the arrival of the railway in 1845. This allowed middle class men to live in Guildford and commute to work in London. By the 1870s Guildford had become a dormitory town.

Nevertheless there were some industries in Guildford in the 19th century. These included brewing, engineering and printing. In 1895 the Dennis brothers set up a firm making bicycles. Later they made cars and public vehicles.

In the 1860s a doctor named Thomas Sells built a new estate at Charlotteville. (It was named after his wife). As a doctor Sells named some of the roads after famous doctors (Harvey, Jenner, Bright, Addison). The first modern hospital in Guildford was built in 1866.

GUILDFORD IN THE 20th CENTURY

Then in 1927 Guildford was made a diocese separate from Winchester. Work on a new cathedral began in 1936 but it was held up by the 2nd world war. The cathedral was not consecrated till 1961.

The first public library in Guildford opened in 1942. In 1965 the Yvonne Arnaud Theatre was opened. It was named after a concert pianist. A Civic Hall was built in 1962. The University of Surrey took its first students in 1968. A new sports centre was built in 1971. The Royal Surrey County Hospital opened in 1980.

In the early 1980s a new estate was built at Merrow Park. The Friary Shopping Centre opened in 1980. Today the Borough of Guildford has a population of 137,000.