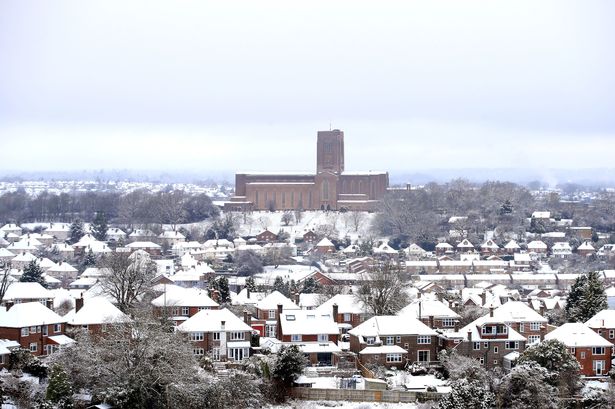 Light snow has been forecast to fall in Surrey this weekend as cold conditions extend to the south east of England.

The Met Office has issued several yellow and amber weather warnings for snow, ice and rain this week for Scotland and northern England. This is due to cold air from Scandinavia meeting warm air from the Atlantic and turning rain into snow when they meet.

Towards the end of the week, a low pressure system is expected to pull across southern England and over the weekend a cold flow of air from the continent could bring the wintry conditions to Surrey.

As of Wednesday (February 3), BBC Weather is predicting flurries of snow in the county on Sunday morning (February 7).

Temperatures are unlikely to rise higher than a chilly 5C, dropping to sub-zero levels overnight.

On Sunday morning, between 6am and noon, light snow showers and a gentle breeze are predicted in north Surrey, in Staines.

Light snow showers at about the same time are also forecast in south eastern parts of the county, in both Redhill and Oxted.

Similar wintry weather is forecast in Epsom and Woking, on Sunday morning, and in Addlestone.

Meanwhile, in Camberley the snow is predicted to fall for a less prolonged period in the late morning, between 11am and noon.

BBC Weather predicts Dorking will have even less light snowfall, and only between 6am and 9am on Sunday.

Guildford isn’t predicted a flurry of snow until early next week, while on the south western edge of the county in Haslemere, no snow is forecast at all.

Met Office deputy chief meteorologist, Mark Sidaway, said: “Into the weekend snow will continue across much of Scotland, and is likely to increasingly fall to low levels before beginning to move south into northern and eastern England.

“We are likely to see some very large accumulations across higher parts of Scotland especially, with strong winds leading to significant drifting and blizzard conditions at times.

“Although amounts of snow across England are likely to be less than seen across Scotland, the potential is there for some heavy snow across eastern England later in the weekend, and perhaps elsewhere in southern Britain as we head into next week, with very cold easterly winds.”

It follows heavy snowfall across much of Surrey at the end of January, welcomed by many as a lockdown treat.

You can take a look at a selection of photographs of the winter wonderland scenes in our gallery of photos here.

The infection rate for the whole county of Surrey is now 37 cases per 100,000 people Surrey Live – News…

Rates are down in all 11 boroughs Surrey Live – News…