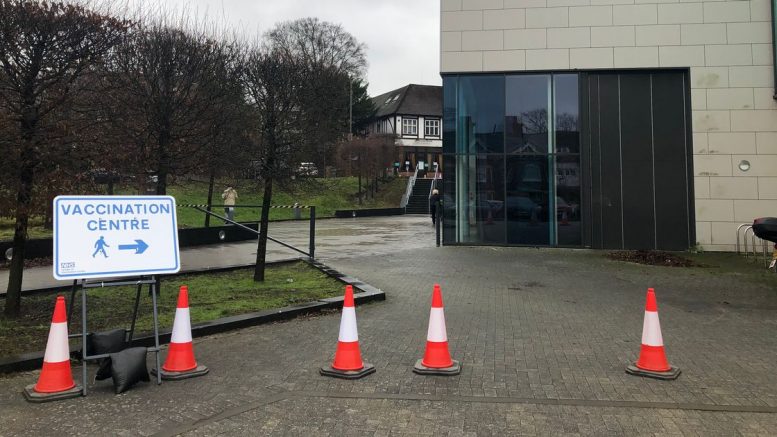 The G Live vaccination station has not been able to open this week because it did not receive its expected vaccine supply.

The arts centre in Guildford was transformed into a vaccination station a fortnight ago, with plans to vaccinate more than 8,500 people a week.

It has been shut since Monday (25 January) due to a lack of vaccines. Surrey Heartlands Clinical Commissioning Group (CCG) said it is expected to reopen on Thursday (January 28).

They say it will not affect the number of people expected to be given the injection this week, and they are “working hard to meet the government’s target” in three weeks time.

A CCG spokesperson said: “There has been a change to the delivery slot for the local vaccination service at G Live in Guildford this week.

“The number of people who can be vaccinated is led by the supply of vaccine available.

“This change has not impacted the number of people we would have expected to vaccinate this week – the model has flexibility to allow for changes to delivery and the site can offer appointments 8am-8pm, seven days a week.”

She said all their other vaccination centres were running as normal.

Superdrug stores that give the jab, for example in Guildford High Street, are commissioned separately by NHS England.

The CCG spokesperson said they were “progressing well towards meeting the target of vaccinating the first four priority groups by mid February”.

These have been decided on nationally, by the national Joint Committee on Vaccination and Immunisation (JCVI).

Surrey Heartlands, which covers about three quarters of the county’s population, was close at the end of last week to getting all the care homes’ clients and staff vaccinated, but had to reschedule some visits because of “outbreaks in a small number of homes”.

In their area over the six weeks up to the end of Sunday 17 January, 62,707 people received the first dose of their Covid-19 vaccination, (34,528 aged 80 and over and 28,179 under-80s) according to National Immunisation Management Service data.

About 230,000 people in Surrey are in the top four priority groups – this means if the target is met, nearly one in five of Surrey’s population would have received their first injection by February 15.

Surrey County Council leader Tim Oliver said he had confidence it could be done, “subject to getting hold of the vaccine”, as he said 55,000 jabs a week could be given at full capacity.

He said: “That’s phase one and we need to hit that, but no one should be breathing a sigh of relief after that. We need to get on and vaccinate everybody else.”

“It takes up to three weeks for the vaccine to be effective,” he added. “This vaccine is not a suit of armour.

“People must continue to behave sadly and abide by the social distancing rules, face coverings and washing their hands. They need to do that irrespective of whether they’ve had the vaccine or not.”

Opinion: Parents have every right to keep kids out of school because Government is flapping