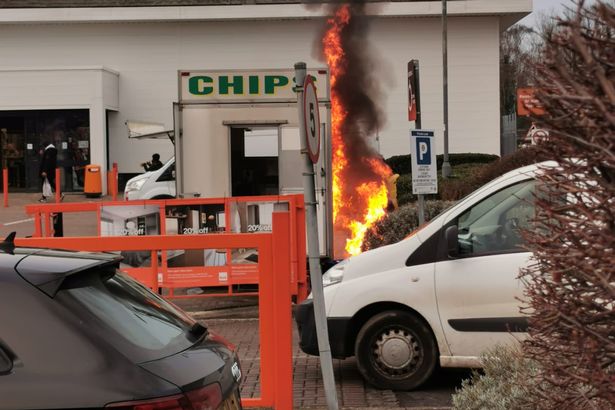 Surrey B&Q staff rushed to help put out a burger van fire which had broken out in a car park just outside their store.

They reportedly offered fire extinguishers to a man, believed to be running the pop-up food stall, who was seen “risking life and limb” to put out the blaze, according to an onlooker.

Two fire engines from Guildford attended the incident in Ladymead Retail Park after receiving five calls from concerned members of the public on Saturday (January 9), shortly before 3.10pm.

An eyewitness, who wishes to remain anonymous, said: “The whole thing was done and dusted within about six or seven minutes.

“Poor bloke was risking life and limb to try and get the fire out, he used two or three fire extinguishers to no avail, the B&Q staff came running to help with their extinguishers too and that helped it stay at bay long enough for fire engines to get there.”

Commenting on the incident, a Surrey Fire and Rescue Service spokesperson said: “It was a road vehicle alight. Two breathing apparatus were used and a thermal imaging camera.

The spokesperson confirmed no injuries were reported.

Surrey weather: When snow is forecast to fall in different areas of the county

The best Christmas jobs at Next, Pandora, Pets Corner, F. Hinds and other retailers